For our twenty fifth wedding anniversary my husband and I planned a trip to California with our son and his wife and little grandson, who was born on our anniversary!! Our first grandchild born on our anniversary was really special, we thought! We also thought it was time to replace our gold bands for new rings. His came with a design and this time mine had diamonds in two rows across the top. I was so excited and even thought of leaving my ring at home. You see, I’ve never been good at keeping up with my jewelry anyway.

To get the best deal on airline tickets for four adults and a baby we had to fly out of Knoxville, Tennessee which is about two hours from where we live. We had to leave very early in the morning with all our suitcases, carry on bags, stroller and extra baby gear to head to the airport in time to park the car and check in early, leaving us with two hours of waiting time. Plenty of time to get a good breakfast for the long flight ahead.

The flight was direct and we all slept a good bit of the way, even Austin who was almost one. When we landed in LA we were rested enough and thought we’d go visit where the Chinese Theatre is and look at the famous foot prints of movie stars from the past. Hollywood is several blocks of wax museums, book stores, coffee shops, gift shops and places to eat. This is also where the Red Carpet Academy Awards are held each year at the Kodak Center. We had a wonderful time and spent many hours relaxing before heading to Santa Barbara to really start our vacation with my sister and her family who lives there.

When we got to the parking garage where our rented extended van was, I looked at my finger and noticed my ring was no longer there! My husband said, “let’s go back and look for it”. I thought, LOOK WHERE?? We’d been in all the little shops and had coffee one place and lunch another. It was impossible, like looking for a needle in hay stack. The two hour drive to my sisters was the quietest everyone had ever been. I was crying quietly in the passenger’s seat up front and even my grandson felt something was wrong so he never made a peep the whole way!

We were greeted at the door with happy faces and my brother in law, George, had prepared a delicious dessert we all usually enjoy .

The others ate their dessert but I went straight to bed and cried myself to sleep.
I felt sorry for myself and my prayers weren’t very worth while. But as the days passed I began to accept my fate and I started praying that someone in need would find the ring and feed his or her family with the money they received from selling it. Let it bring new life or meaning to someone else. I didn’t really need it to survive anyway! So each night I cried a little less and prayed a little differently.
We had fun and went to the places we had planned. Walks on the beach everyday. Great lunches from Brophy Brothers Seafood Restaurant on the Santa Barbara Pier to Stella Mare’s French Country Cuisine at the Bird Refuge there. We even found time to eat tacos with handmade taco shells from La Super Rica Taqueria on Milpas Street. We visited the Old Mission on Laguna Street and went through the famous court house used in TV shows quite often.We drove to Buellton for Anderson’s best split pea soup and bought some cans of it to bring home. And we never go out west without driving to Solvang, stopping by some of the nice western towns along the way.

The last day came and my sister, Rose Carol, as we call her, fixed her families’ favorite breakfast recipe and I was going to eat every bite on my plate because I was sure God had answered by prayers and my ring was going to help someone in need. No more worrying over “spilt milk” for me!

We spent the last evening washing a few things, packing our bags and preparing to leave the next morning. We wanted to get a good nights sleep for the day of travel that was ahead of us. The next morning we were leaving early enough so my daughter in law, Lisa, could meet her sister, who now lived in California, for lunch. Everyone was suggesting places close to the airport.

Well, during the night and I assume it was while I was sleeping, a vision of a store front from the Hollywood area we had spent our first day in came across my mind! I couldn’t get it out of my head and I thought if I said anything, people would think I was crazy! So I suggested we meet Lisa’s sister there for lunch. They all quickly agreed since it was a fun place to hang out. At this point I wasn’t sure what I was doing either so I just followed my instincts . We parked the van in the same parking garage, got out and saw an elevator ahead so we got on it and pushed the button for down. When the doors opened, the first thing I saw was that same store front I had seen in my dream. Again I was walking like in a trance and went into the store. I looked around till I saw a man who was a security guard that I had a magnet like feeling to go up to. I didn’t know what to say so I just blurt out “I know this sounds crazy but ten days ago I was in this store and lost my wedding ring and wondered if anyone had turned it in?” He looked at me like he’d seen a ghost and said “You, wait here ” and he left. After a few minutes he came back with the store manager. The manager was asking me to describe my ring in detail. My husband said “we have a picture on my camera!” and off he went to get it. When he came back he pulled up the picture and their on my finger was my beautiful ring. By now I had several managers around me talking, saying things like it’s too small to see and if they had found something like that, it was the law to turn it into the police, etc, etc! I then said loudly, “where is the police station?” It was just down the street in the Kodak building only a block away. So off we went still not knowing what we were actually doing! We go into the station and up to the counter. I felt like I was acting in TV show asking if anyone had turned in a wedding ring. Of course the policeman laughed a little and gave us a paper to fill out describing the ring and putting down the dates we had been there last. They looked at the small picture my husband had on his camera and said it was really too small to see very well. My husband said we were standing in the Kodak building and could have it blown up to whatever size they needed. Finally another policeman higher up than the one we were talking to said to us, “we don’t usually do this, but we have a ring back here and we’re going to let you look at it!” It was my ring!! I turned and said to them “I love this city !” They said back “we don’t get comments like that very often ma’am !”

It was a gift from God! Or my guarding angels working over time!! I have misplaced my ring several times since then, but I’m never worried that I won’t find it! If I can find an expensive diamond ring inside a store at the corner of Hollywood and Vine in Southern California, I could find it anywhere! ( with a little help from God, of course.) The security guard I was lead to was the person who personally found it buried underneath some T-shirts at a cash register and the store never expected anyone to comeback for it so they were detaining me at the store while someone from there took it to the police station. How I saw that store front in my mind the night before we left to go home is a miracle of some sort. But I know my prayers turned from selfish to wanting to help others!
God is always in control and we often times just get in His way. 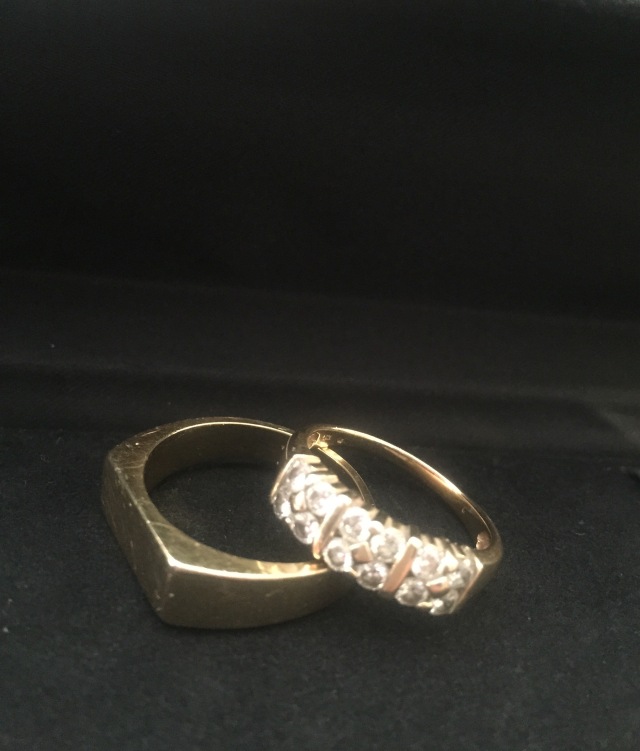 15 thoughts on “An Anniversary Ring Miracle 💍”